Spanning Tree Protocol (STP) free network inside Data Center is main focus for network vendors and many technologies have been introduced in recent past to resolve STP issues in data center and ensure optimal link utilization. Advent of switching modules inside blade enclosures coupled with the requirements for optimal link utilization starting right from blade server has made today’s Data Center network more complex.

Q-1. What if Virtual Chassis option is not available, specifically in the scenarios where Juniper EX 9200 / QFX 10K Chassis based switches are  deployed as End or Row switches.

Q-2. What if, instead of Rack mounted servers blade chassis enclosure (equipped with switching module)  are used as compute machines and there is requirement for active/ active  or active/ passive NIC teaming on blade servers.  How the overall network will look and work right starting from blade server NIC.

This blog will answer these questions:-

Assumption:- Network Switches are placed as End of Row  model and to cater for STP Multi-Chassis Link Aggregation (MC-LAG) is deployed. Please see one of my earlier blog for understanding of MC-LAG. 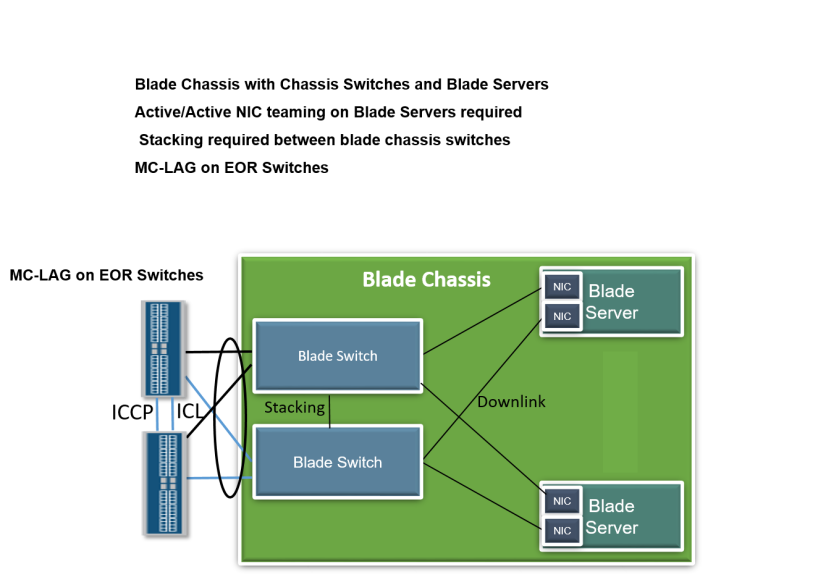 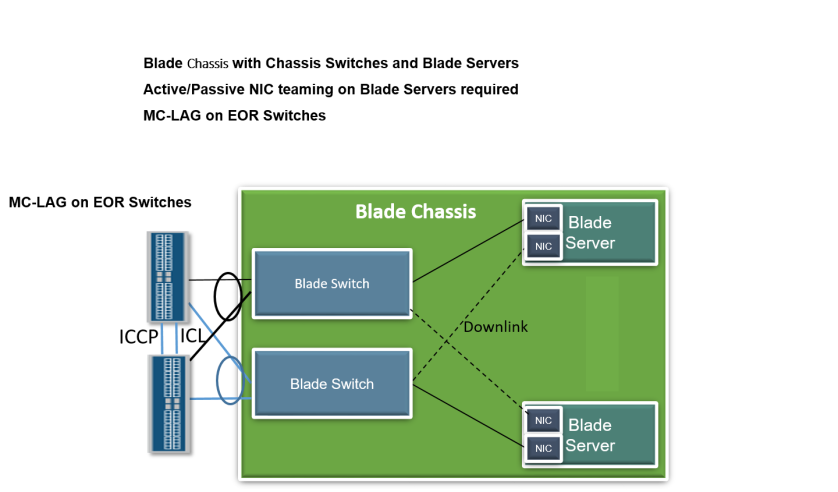 The objective of this blog is to discuss end to end packet (client to server)  traversing through a service provider network with special consideration on performance effecting factors.

We will suppose client needs to access any of the service hosted in server connected with CE-2, all the network links and NICs on end system are Ethernet based. Almost all the vendors compute machines (PC/ servers) are generating IP data gram with 1500 bytes size  (20 bytes header +1480  data bytes) in normal circumstances.

Fragmentation:- If any of link is unable to handle 1500 size IP data-gram then packet will be fragmented and forwarded to its destination where it will be re-assembled. The fragmentation and re-assembly will introduce overhead and  defiantly over all performance will be degraded.  In IP header following fields are important to detect fragmentation and to re-assemble the packets.

With below example we can understand transfer of IP data-gram between end system. Total size of IP data-gram is 4860 bytes which includes 20 bytes IP header so total data bytes are 4840.

As earlier explained Ethernet based NICs starts assume the default IP packet size 1500 bytes (20 bytes header + 1480 bytes data). So packets will be divided in 1480 bytes size chucks and will be transmitted after adding 20 bytes IP header.

The receiving host will reassemble the data once all fragments are received and will place the data bytes extracted from all fragments into relevant position inside original packet as it was before on sending host before fragmentation. Fragment offset value will be used for  this purpose (its always multiplier of 8)

Path MTU Discovery -MTUD :– Path MTUD is defined in RFC 1191 where end systems detect maximum allowed MTU on a communication path. End system starts sending IP packets by using MTU of outing interface (default value is 1500 with 20 bytes IP header and 1480 data bytes) and DF bit SET. If any of link in between source and destination does not support 1500 bytes size IP packet then “ICMP destination un-reachable” with type 3, code 4 returned to originator host because of DF bit SET value as it tells “do not fragment this packet”.  When such messages are initiated MTU of next hop is also included in it by the router which was unable to pass 1500 bytes IP packet. This process will continue until originator host finds maximum MTU allowed on a communication path till its destination and subsequently adjust its MTU for outgoing interface.

As in our above example we suppose originator host start sending IP packet (1500 bytes) with DF bit value=1 (which means fragmentation not allowed). Now suppose, if a link between P and PE2 router has IP MTU of 1400 bytes and fragmentation is not allowed so packet will  be dropped on P router and as subsequent action  ICMP destination un-reachable with type 3, code 4″ will be returned to the originator host. If this message does not reach the originator host or unable to report MTU (as per RFC specification) of next-hop on the router where packet was dropped. Then only option available with application administrator is to clear the DF bit on originator host which  mean if any links comes across with lesser MTU then packet can be fragmented.

Now suppose IP packet with 1500 bytes and DF Bit=0 (fragmentation allowed) has been initiated from client, it reaches P routers and finds MTU of next-hop is 1400 which is lesser then original packet size.  Hence DF bit is clear so P router will fragments the packet and transmit 1400 bytes  (20 IP header and 1380 Data bytes) and then 120 bytes packet. Original packet  which arrived at P router was of 1500 bytes size will be transmitted in 2 segments toward destination.

As in above referred example IP   segment size was 4840 including 20 bytes IP head  and it was transmitted  in 4 segments by the originator  ( 3x 1500 bytes segments and   1  segment with 520 segment (all fragments includes 20 bytes IP header). 1st three segments will be fragmented on P routers and will be transmitted in 2 segments  of 1420 and 120 bytes . It looks normal with respect to forwarding operation on router but lets suppose any of 100 bytes segments transmitted by P router does not reach destination due to congestion on any link , in this case destination host will not be able to re-assemble the packet due to lost of 1 fragment. Thus whole transmission needs to be repeated and one can imagine the impacts on performance.

But usually Service Providers have Service Level Agreement (SLA) with corporate customers to support minimum MTU (usually it is 1500 bytes). In next blog we will discuss MTU overhead for various tunneling / VPN approaches (e.g L3PVN, L2VPN/VPLS , GRE & IPsec from CE-1 to CE-2)

MTU is most important aspect for proper functionality of any application. In this blog post I will highlight MTU handling by Junos based devices for (802.3 un-tag and 802.1Q tag packets) .

In 802.1Q header additional 4 bytes are added thus new header consists of 18 bytes as compare to 14 bytes header for 802.3 and total packet size will be (18 bytes header + 1500 bytes payload). We have configured an aggregated Ethernet (ae1) interface trunk mode (which enables the interface to receive 802.1Q tag packets).

The objective of this article is to highlight design consideration for NIC Teaming between  Juniper QFX 5100 (Virtual Chassis -VC) and VMWare ESXI host.

Reference topology is as under:-